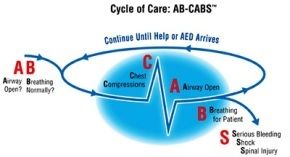 Recent PADI Training Bulletins and EFR The Responder newsletters announced that greater emphasis on early and effective chest compressions was the main aim of the 2010 ILCOR (International Liaison Council on Resuscitation) Guidelines. You will notice that the traditional ABCs order of priority care in EFR courses has been expanded to the new order of AB-CABS, continuing the steps into a Cycle of Care (rather than the patient’s lifeline).

The AB portion of AB-CABS reminds emergency responders to check if the patient’s Airway is open and if he is Breathing normally. If not, the responder moves rapidly into delivering Chest Compressions, opening the Airway and then Breathing for the patient (30:2). If he is breathing normally, then the responder can move further in the Cycle of Care, i.e., the S to check for Serious Bleeding, Shock and Spinal Injury.

Regional resuscitation councils and organisations use agreed on ILCOR emergency protocols for their specific regions. The following entities distribute guidelines for the listed regions;